I need the lawmakers to make up their mind.

And personally, I am rooting for them.

Apparently, the government has more of an interest in my health than I thought, and I think it’s mighty big of them to want to take over.

I am in my mid-40s, paunchy, and I’d really like someone else to take over responsibility for me. Like so many during these COVID-y times, my pants seem to fit more snugly. Let’s be honest: I even have a few pairs that have drawstring waists, something so sadly middle-aged I can’t believe I am copping to it.

I should eat better. I should exercise more. So many things, so very little time.

That’s why I am elated that Montana’s leaders — especially the luminaries among them — seem poised to take over the management of me. I’m a unique fixer-upper — 45-years-old, heart valve recently upgraded, nose is broken but still works, and am an absolute delight when drinking and cooking.

Since the Legislature convened, I have heard and seen so much about sanctity of personal choice, especially as lawmakers have rejected science in favor of freedom. No masks required at the Capitol, and the hand sanitizer ran out awhile ago. But lawmakers have the luxury of choosing to breathe it all in, even as fellow Montanans are left gasping for breath as the coronavirus ravages their respiratory systems. Our right to live, in some cases, is only being superseded by our right to kill ourselves in the most preventable way possible.

Set aside the lack of social distancing and the lawmakers’ ability to meet remotely, and for a moment, consider three pieces of legislation that are generating quite the unmasked buzz beneath the Capitol. Lawmakers are considering whether to remove the government between you and your doctor in Senate Bill 101. Apparently, there are too many people telling your physician what he or she must do. Meanwhile, lawmakers are considering two bills that would specifically regulate when transgender athletes can participate in sports and what kind of therapeutic treatments doctors can give to those same trans people.

Finally, there isn’t one but four bills regulating abortion.

Here’s the deal: If you want to control all aspects of healthcare, wonderful. I look forward to shifting my poor personal decisions onto someone else more wise, informed and motivated.

We say that women should have the freedom — the, ahem, liberty — to decide with whom they have sex, but we healthcare-handcuff them when it comes to dealing with the very real and often challenging topic of the natural consequences of sex, pregnancy.

I am having a hard time understanding how wearing a small piece of cloth to protect yourself and others is an affront to personal liberty and freedom, while regulating approved, legal medical procedures by consenting people and licensed professionals is just good government.

And if the leadership of the state, through the Republican Party, takes its election win last November as proof positive of a mandate, and part of those mandates were to release us from the bonds of an overbearing government, four more abortion bills and two transgender bills seem like a lot of new regulation.

I don’t for a moment truly believe anyone wants to regulate me — a white, middle-class male. I don’t blame them. I once told a cardiologist that butter, bacon and bourbon were non-negotiable. I would say to anyone attempting at regulating my health: It’s a big job.

Yet, I am not a woman. I am not transgender. And, if we’re really honest, the lawmakers don’t really have any interest in the more mundane aspects of health care, like diabetes, cancer or the occasional knee replacement.

Instead, we seem kind of fixated on genitalia. If it has to do with genitals or anything that happens as an extension of those, then lawmakers who seem to want to throw the government out of our lives suddenly want to walk right in again.

This hang-up with sex is also a powerplay. A look at the statistics shows a declining number of abortions, especially with the ubiquity of birth control. And the number of people undergoing gender reassignment is statistically small. These are solutions in search of problems.

The question, though, is one of why. Why do folks feel this way?

These restrictive pieces of legislation, which are winding their way through committees and chambers, aren’t just about controlling certain anatomical regions, they are about being afraid of change and uncertain. It’s about not knowing someone who is trans, believing that they lead a life with wholly different hopes, fears and aspirations. And, it’s about worrying that if women are given complete control over their bodies, and total control of their healthcare decisions, what may happen next?

I would suggest that a healthy dose of bravery is the perfect prescription for what ails us here in Montana. We could drop some of this silly legislation and work toward better understanding those who aren’t exactly like us; and we can do more to make sure women have healthcare alternatives so that they never have to consider an abortion.

But, if Montana lawmakers really want to take over healthcare in this state, I have four bad discs in my back just barking for some attention… 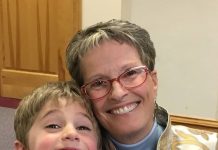 Ehrlick: For people who love freedom, these lawmakers have a funny way of showing it