“It would be scary to go outside,” said Stoneking, of Missoula.

She doesn’t want to use the word if it’s inappropriate, but she believes she may have suffered agoraphobic tendencies, and she struggled to even leave home to visit the doctor.

“It was difficult to carry out the resources I needed for myself,” she said.

Stoneking, who is studying women’s, gender and sexuality studies and social work at the University of Montana, decided to take off fall semester. She could help her mom, a widow, and she could remain more isolated as cases spiked. She also wanted to avoid a mostly virtual education.

“I didn’t think I would get the quality content I desired from my classes,” Stoneking said.

Editor’s note: On March 11, 2020, the World Health Organization declared COVID-19 a pandemic, and two days later, the coronavirus was confirmed in Montana. Since then, Montana has counted more than 100,000 cases and nearly 1,400 deaths. This month in an occasional series, the Daily Montanan is talking with people about how the pandemic changed their lives. If you know someone you believe would be good to talk with about living through the pandemic, or if you would like to share your story, please email the Daily Montanan at [email protected]

In the spring semester, the COVID-19 pandemic took a toll on her mental health. In the early summer, the coronavirus sent her to her hometown, Helena, to care for her mom. Stoneking said her mom had undergone a lung biopsy a few years earlier, and her doctor told her she couldn’t leave the house.

“She is really at risk,” Stoneking said.

The easily spreading virus that infected more than 100,000 people in Montana and led to the deaths of nearly 1,400 through the first week of March gave the economy a gut punch. In the fall, the pandemic served up the worst month for Stoneking.

She had been working two different jobs, but in November, the work ended. She’d landed interviews for other jobs, but an offer hadn’t materialized.

“I wasn’t really left with a cushion to support myself with,” Stoneking said.

She relied on her partner, but he’s a full-time student who was living off his financial aid refund. The inability to provide for herself coupled with stresses about her family plagued her.

“It would bring me to those thoughts of doom,” Stoneking said. “My worries and anxieties about my family’s health came up.”

At the age of 19, she had lost her father to an unexpected heart attack, and now, she worried about losing her mom too. Stoneking said she’s a chest and heart person, and she felt the stresses and inner child anxieties physically.

“It feels like my sweater is going to pop off if I don’t stop thinking,” she said. “What if I lose another parent? And then I don’t necessarily have someone whose job it is to care for me?”

She went six weeks with no paycheck, and she’s grateful Montana had a ban on evictions. In the spring, former Gov. Steve Bullock temporarily halted evictions for nonpayment, and Gov. Greg Gianforte continued protections for renters under certain conditions.

“If that wasn’t applicable, I would have been in serious trouble,” Stoneking said.

At UM, the vast majority of faculty members list the food pantry as a resource on their syllabi, Stoneking said. So she knew she could head to the Associated Students of the University of Montana Food Pantry for groceries.

Hilary Rosa, Americorps Vista with the ASUM Food Pantry, said reports show the pantry has doubled its distribution since last year. She also said the discrete grab-and-go program accounts for one third of the distribution, which might suggest new users.

“One possibility is that people who have not previously had to use these services are now having to,” Rosa said. 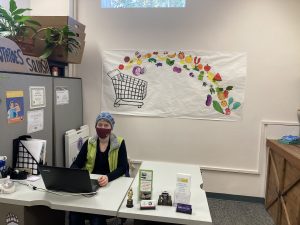 The ASUM Food Pantry serves 400 households in Missoula County and distributes more than 1,000 pounds of food every month, Rosa said. She’s heard stories about clients having their hours cut or jobs lost, and many people have said that when they have to quarantine, they don’t get paid.

“We’ve actually had to take some food to students in quarantine because they’re just having to isolate when they don’t get any paid time off,” Rosa said of students living off campus.

When Stoneking visited, she picked up pastas because they are filling, along with pasta sauces, soups for lunch, breakfast items like oatmeal, and probably peanut butter for peanut-butter-and-jelly sandwiches. She also learned the food pantry was hiring a student coordinator, and she landed the job.

Stoneking, set to graduate in the fall, said the Student Advocacy Resource Center, or SARC, helped her cope in the pandemic. She sought counseling there, and the price was right.

“You get 12 free sessions a semester, so that was a really big part of it too when I was going through these financial hardships. I could only get help if it was free,” Stoneking said.

She said professors could do a better job of directing students to mental health services the way they advertise the food pantry. She and her partner also do little tasks that help her anxiety, such as disinfecting their apartment twice a week.

Her mom is doing well. She received her first vaccination and should be getting the second one anytime, Stoneking said, and Stoneking’s brother has taken over the role of helping out with groceries and shoveling.

“I got the easy season of the year,” Stoneking joked.

The editor’s note was corrected to note COVID-19 cases were confirmed in Montana two days after the World Health Organization declared the pandemic.

Stoneking: ‘What if I lose another parent?’