Lawmakers charged with crafting the budget voted for an amendment on Friday that would restore a pair of tribal liaison positions in the Department of Public Health and Human Services, reversing cuts that Democrats and indigenous Montanans have been agitating against throughout the session.

However, the House Appropriations Committee voted to forge ahead with its elimination of a policy that keeps residents enrolled in children’s and adult health programs.

The committee restored tribal liaison and director of American Indian healthcare positions within the department, jobs that a budget subcommittee cut from DPHHS in February.

Rep. Matt Regier, R-Kalispell, the chair of the budget subcommittee addressing healthcare, questioned whether the two positions were necessary, given the scope of the agency’s staffing.

“The positions are $120,000 per position,” Regier said Friday in advocating to maintain the cuts. “There are other tribal liaison positions within the government. This department has 2,850 employees. We’re all Montanans. I believe you call any time and those 2,850 employees would be willing to help any Montanan.”

But leaders from the tribes and fellow lawmakers pushed back. Governor Greg Gianforte and DPHHS Director Adam Meier have also opposed the cuts.

“That may be true we’re all Montanans, but there’s distinct needs (among tribes) and also, even within this body, with churning every two years there is a lack of understanding in terms of interfacing with the government to government consultations,” said Rep. Sharon Stewart-Peregoy, D-Crow Agency.

Rep. Jonathan Windy Boy, D-Box Elder, who sponsored the amendment to restore the cuts, said that without the positions, there will be communication gaps that will hurt residents because the state will not be connecting directly with Indian Health Services. 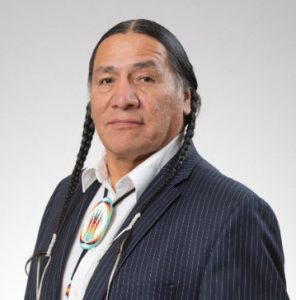 Democrats were unable to reverse other changes to the agency’s budget, namely the elimination of continuous, year-round eligibility for Medicaid and the Children’s Health Insurance Program, or CHIP. Continuous eligibility allows residents to stay on programs automatically, subject to a verification schedule set by the state or federal government. However, Montana lawmakers opted during the budget subcommittee process to eliminate continuous eligibility, which would mean those enrolled in the program would have to recertify or would drop off the program if their life-circumstances changed.

Proponents of dropping the continuous eligibility argued that money is being spent on people who don’t qualify and it reduces the chances of fraud. Meanwhile, opponents said this keeps the most vulnerable – children and some adults – covered without gaps in the care. They also argue the measure reduces churn, or the number of times enrollees have to apply and re-apply, which also cuts down on administrative costs.

Rep. Mary Caferro, D-Helena, said that the $3.1 million cost to the state was a penance for ensuring that people who need coverage are not dropped.

These two policies are a part of a much larger discussion around House Bill 2, the Legislature’s primary spending plan. That bill has moved to the House floor, where it’s likely to be debated, amended and has to ultimately pass to the Senate. After that, the differences between the two must be negotiated and then presented to the governor for signature.

Montana’s Constitution requires a balanced-budget, though the state currently faces a structural imbalance.

Lawmakers are also looking at another significant pot of money in the form of federal COVID-19 aid contained in the American Rescue Plan Act, which leaves the state almost $3 billion — a significant chunk of which the Legislature has authority to appropriate.