The mark left on the community was more than just the stories that followed from one of the students. For example, a lawsuit filed by Deon Gillen’s family alleged the teenager had been bullied for years and administrators had failed to intervene. Newspaper reporters from as far away as New York City wrote about the deaths.

The deaths also sparked something remarkable to come out of a bleak tragedy: Rather than letting division spread, Park County and the city of Livingston — if such a word can be used for a town of 8,000 — decided to do something about it, more than just holding a meeting or making sure counselors were present.

LiveWell 49 (taken from the county’s license plate number “49”) is a coalition of community members, public officials, school administrators, health leaders and students who have come together to tackle the problem of suicides, which plague the entire state. The goal is audacious, especially during a pandemic and some social unrest: No more suicide.

Rosemary Smith, one of the leaders of the LiveWell 49 project, told the Daily Montanan that students originally pushed for help, reeling from the loss by suicide. The group that formed in response understood that the responsibility for the solution couldn’t be tied to one individual or organization; rather, it would take the entire community.

Three years ago, the LiveWell Resilience project started out to develop and enhance suicide prevention programs that would support and promote social and emotional wellness based on trauma-informed mental health practices. The community rallied around the ideas of training community members to identify those at risk of a mental health breakdown or suicide and reduce the stigma. As part of their efforts, they also identified resources and materials to distribute to the community.

Just recently, Livingston Health Care supported the initiative by creating a full-time position, which helps support the community health initiatives through LiveWell 49. Jessica Wilcox, of Livingston Health, said that while the healthcare system can’t be the only organization in town supporting the efforts, it’s necessary to use the hospital and doctors as key resources.

“It’s in how we do this. We have to lead by example,” Wilcox said.

Montana either occupies or is near the top of a list for suicide deaths per capita. According to the Centers for Disease Control and Prevention, Montana ranks third, behind Wyoming and Alaska.

One of the biggest initiatives led by the group that is trying to turn the trend of Montana’s high suicide rate is universal screening for students in the Livingston Public Schools. The plan is two-pronged and aims to screen all students and then be prepared to rapidly respond to anything identified during the screenings.

The community is working toward screening all ninth graders using a tool called the PHQ 2.

Dr. Brain Ahmedani, a psychiatrist with the Henry Ford Health Foundation, has been one of the leading researchers in a program with zero suicides as its goal.

“This really is a shift because 20 years ago, there was this belief that there really wasn’t anything you could do if someone wanted to take their lives, but the philosophy is shifting,” Ahmedani said.

LiveWell 49 credits Ahmedani with helping to develop a community-based approach for Livingston and Park County.

“The field is still in the infancy stage where as the rest of medicine has been practicing for hundreds of years. But up until about 20 years ago, we believed there was nothing we could do in this space,” Ahmedani said. “It doesn’t always happen that every single person is prevented, but there’s no other goal that makes sense if you think about it. What are you going to reduce it by? 10 percent? 20? 50? What about all the rest of the people?”

He said that goal was at first scoffed at — because it seemed impossible. However, he said other industries, like the airlines, have come very, very close to preventing catastrophic accidents and reduce accidents to nearly zero. If the airlines can do it, medicine can, too, Ahmedani said.

He stressed intervening “farther upstream” — before a crisis. Screening seems to be one of the best ways to identify early warning signs.

“For so long we used the approach in mental health and suicide is wait for the crisis and then respond. But that was not successful,” Ahmedani said. “Once they go down that road, there’s a really high likelihood that they’ll do it again. We have to have the space to be successful earlier.”

One of the key findings of his research has been the healthcare system itself.

“In the early 2000s, we asked ourselves: Why is it we have the best doctors in the world, the most money, the most research and the best technology — we have everything we need and the best healthcare in the world, and we’re still 35th (in overall outcomes),” Ahmedani said. “We found that there were uncovered gaps in care. People fell through the cracks or were not connected, especially in that time in mental health.”

Though the problem has gotten better, Ahmedani said, it still remains. He gave a simple illustration of the still-lingering challenge: When someone calls for an appointment for mental health, the wait time can still be months, even if the person is heading toward crisis.

“It’s like being sick right now with the flu or some health problem, but the next available appointment is in three months,” Ahmedani said.

He stressed that screening alone doesn’t prevent suicide. Instead, he said the resources in the community and directing suicidal residents to good support does.

“The truth is that most suicidal people don’t make it to mental health (departments),” Ahmedani said. “Two-thirds of them didn’t meet with a mental health counselor and one-half didn’t have a mental health diagnosis. Most only visited their primary care settings.”

That means that more front-line physicians like family care or internal medicine practitioners need to be trained and have familiarity with resources.

“We spent more money in prevention and saved money and reduced bad outcomes,” Ahmedani said. “You can provide a lot of outpatient care for the same price as an ER visit, but people have to work together.”

One of those examples of community working together was experienced by Smith.

She said when her 15-year-old child was a pallbearer at a fellow student’s funeral, it was rough. So, too, were the conversations that followed.

“When a child comes to you with these thoughts, we want to tell people: Thank God. If they talk, we can fix it,” Smith said.

She said that’s required parents in the community to become more involved in their children’s lives and at school. For example, bullying, especially online, can be the source of constant stress.

“Now it’s the students who come to us, and we say, ‘Hey parents, look what’s going on,’” Smith said.

The group leaders said the more they studied the issue, the more it became clear an entire community-based response was necessary. For example, mental health has a close link to physical health, so the program found allies in the farm-to-table programs as well as resources for health clubs and counselors.

“We need the message to be: When you come to Livingston or Park County, expect healthy living,” Smith said.

The group is also training folks in different businesses to identify warning signs of mental health trouble in individuals and then connect them with resources. One example is a billboard that shows members of the local Ace Hardware store that reads, “Just like at Ace, it’s OK to ask for help,” with a billboard that encourages people to dial 2-1-1. Another idea is a bar coaster that has resources printed on it for local bars.

Some of the ideas that are gaining traction are men’s groups that focus on groups tasting different beer, cooking on Traeger smoking grills or even fly-tying. Wilcox explained that those groups serve several different purposes. First, they bring people together for social interaction, but those informal, comfortable conversations also let people talk openly about personal struggles. It’s at those points where community members can intervene and provide resources.

“We need to give them just a little time to think,” Smith said.

LiveWell 49 also uses a proven “question, persuade and respond” method to try to influence those with suicidal thoughts, steering them toward help and resources, while reminding them they’re not alone.

“The first question, though, is how do you bring it up? How do you persuade or delay?” Wilcox said.

Groups of community members meet to train and practice. Bringing up mental health or the sometimes socially taboo topic of suicide means that residents need to know how to talk about the subjects. Smith admitted when she first started, even she was surprised by how awkward it felt.

“It’s a heartbreaking problem, but it’s preventable,” Smith said. “Delay. Hold on one more day — and the difference that day makes. We want people to know that you can get through it and you can live your best life.”

Communities try gifts, cash and spite to get residents vaccinated 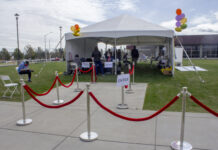 What slowing vaccination rates mean for one Montana county

Nosing in on kids who lost their sense of smell after...