Report: Montana has just one licensed child care slot for every three children under 6

Last year, Montana counted one licensed child care slot for every three children under the age of 6. If looking at only children with all parents working, Montana meets the need of 48 percent of children who need care.

Those are two statistics from the Montana KIDS COUNT report released Thursday from the Montana Budget and Policy Center, “Child Care is Critical to a Modern Economy. Montana Has the Opportunity to Make It Affordable and Accessible.”

“This report finds that Montana families across the state struggle to find and pay for child care,” said a news release. “At the same time, child care businesses operate on narrow margins and often must sacrifice worker pay.” 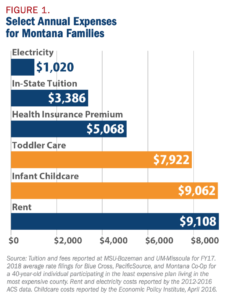 “This is barely hovering above the poverty level for a family of three,” said the report. “Child care workers make less than half the wage of a kindergarten teacher, even though 24 percent of child care workers in Montana have a bachelor’s degree or higher.”

Xanna Burg, KIDS COUNT coordinator, said child care had been a topic the Budget and Policy Center had been interested in for a couple of years. The coronavirus pandemic brought the shortage to the fore, and it also offered one fix in the form of federal aid.

“With the infusion of all of this federal relief money, it was really a good opportunity to think about short- and long-term solutions that could really get at this child care crisis that Montana is experiencing,” Burg said.

KIDS COUNT describes itself as a leading resource on child and family well-being in the state and dedicated to providing relevant data to shape issues affecting Montana children and families. Among other findings, the report noted the following:

“When we think about the economy as a whole, child care is so important for other businesses to succeed,” Burg said. “If parents don’t have a place for their child to go during the day where it’s safe and reliable, businesses aren’t going to be able to recruit or retain their own workers.”

The report’s findings also illustrate that women in Montana face a persistent gender wage gap, said Kylie Gursky, program officer for the Women’s Foundation of Montana. She said a recent Institute for Women’s Policy Research shows that if women in Montana were paid the same as male counterparts, “their poverty would be reduced by more than half, and poverty among employed single mothers would drop by nearly half.”

“A healthy Montana economy depends on folks having enough money and security to keep up basic spending,” Gursky said in an email. “With the annual wages lost due to the gender wage gap, a woman could pay for a year of child care, one additional year of tuition for a four-year university, or more than nine months of rent.”

To solve the problems, Burg said a diverse array of solutions is necessary.

A bill that would have established a business task force to “examine the effects of child care affordability and accessibility on the workforce and on Montana businesses” passed in the Montana Legislature but was vetoed by Gov. Greg Gianforte. However, Gianforte said the problems with child care are clear in Montana, and he’s already working on them.

“Our state has long faced unique child care challenges, and my administration is acutely aware of the toll that inadequate child care takes on Montana families and our economy,” Gianforte said in his veto letter.

As such, the governor said he already directed his cabinet to “strategize and collaborate with those most impacted by our child care gap to proactively build a system that works for our families and businesses.” Additionally, Gianforte noted the federal coronavirus relief aid will support child care providers and help stabilize businesses. A spokesperson noted the Governor’s Office worked to ensure legislation included language to prioritize the use of funds for child care deserts, “understanding that child care is a critical workforce support and component of our economic recovery.”

“Rather than confirm through further study the flaws within Montana’s child care system and the failures of past administrations to remedy these flaws, we must act now,” Gianforte said.

The KIDS COUNT report identifies solutions to address access, quality and affordability. For example, it noted that increasing income eligibility for child care scholarships to 200 percent of the federal poverty level would help. It also recommended expanding shared services statewide to make it easier for child care businesses to coordinate things like accounting and insurance at affordable costs.

Additionally, Burg also said Montana is receiving a lot of federal money, more than $200 million, and it is poised to start tackling some of the systemic problems in child care.

“We have a chance to really do some bigger picture work and reimagine what’s possible for child care,” Burg said.

Montana KIDS COUNT is a project of the Montana Budget and Policy Center, a nonprofit organization providing in-depth research and analysis on budget, tax and economic issues.

This story has been updated with remarks from Gov.Gianforte.