Describing the Montana Public Service Commission’s financials as an “embarrassment” to the state, members of the Legislative Audit Committee voted Monday to delay accepting an audit report until the agency can demonstrate progress on compliance.

“It’s an unfortunate display of what I would call government irresponsibility, and the government being accountable to its citizens,” said Sen. Jason Ellsworth, R-Hamilton, committee vice chair. “And I’m embarrassed by that, as I think you are as the chair.”

Ellsworth directed his comments to PSC Chair James Brown. Brown took office in January, after the audit period, but he too said the ongoing problems were an embarrassment, and he was working to right the agency that regulates monopoly utilities. The committee requested the PSC return in October and deliver an update.

At the hearing, lawmakers heard an overview of a report released last month from the Legislative Audit Division that found numerous problems and financial abuses, including issues auditors have cited before. Problems included a $1,414 “comfort class” ticket to Washington, D.C., falsified expense documentation, a deficiency in internal controls, and $100,000 of revenue and expenses “understated” in 2019.

In the staff report to the committee, Jessie Curtis said auditors had doubts about the evidence presented to them and the “volume of compliance issues.” In a move the division has made just twice before in a couple of decades, she said auditors disclaimed their opinion because they did not believe they could adequately verify information.

“The department’s response is extremely encouraging because they agree with all of our recommendations,” Curtis said. 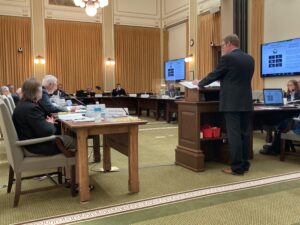 In response to questions, Chairman Brown said he had accepted the resignation of Central Services Division Administrator Mandi Hinman, identified by auditors as the person responsible for the falsified expense documentation. Brown also said he had asked Commissioner Brad Johnson, identified as the elected official who booked a “comfort class” ticket, to return his state issued credit card, and Johnson, vice chair of the commission, complied.

In addition to Brown, Commissioners Randy Pinocci and Jennifer Fielder attended the hearing in person. The commission is made up of five elected officials, and Curtis said Commissioners Tony O’Donnell and Johnson attended the meeting via Zoom.

Sen. Mary McNally, D-Billings, said she had concerns not only about the fiscal abuses, but the pattern of ongoing problems. She said she wanted to know how the PSC was responding to mistakes. For example, had anyone at the agency volunteered to reimburse the state for some of the oversteps?

Said Brown: “The short answer would be no.”

Asked McNally: “So it was appropriate to travel in comfort class as opposed to coach?”

Brown said he too had asked the question of Johnson and had been told it was appropriate travel. However, he had a suggestion for the committee.

“I think that’s a question the committee may want to direct in writing to that commissioner,” Brown said.

At the meeting, the committee discussed calling for a full performance audit to determine whether the PSC’s regulatory responsibilities also had been affected, but legislators did not go that route. Brown said the mission of the agency had not been affected, and his voice broke when he vouched for the work of the roughly 30 public servants at the agency.

Later, Brown said the reason he had become emotional was because news stories about the trouble at the PSC had affected the morale of staff, who had done an “outstanding” job on behalf of the state, some for 20 years. The agency regulates companies such as NorthWestern Energy to ensure the utilities earn enough but customers don’t pay too much.

“For them to sit through this and watch this the last few years, can you imagine what that does?” Brown said.

In his testimony, Brown said the agency had already started implementing recommendations from the audit. It also was restructuring and filling vacant positions, such as a certified public accountant role, to get the PSC on proper footing and improve management. In particular, he praised Commissioner Fielder for her work on a strategic plan.

Brown agreed that a change in tone and culture was necessary and should come from the top. However, he said in some cases, policies were already in place; the problem was a willingness to adhere to them.

“We need better leadership at the PSC, and we need commissioners to start being responsible for their own actions and following their own internal policies,” Brown said. “And I stand before you today, and I recognize that.”

Rep. Denise Hayman, D-Bozeman, said she believes Brown is determined to turn the PSC around. However, she wanted to know how to ensure the turnaround will be permanent and not linked to the personality of the person in his position.

Given the need for change, Brown said he had investigated the authority he has as chair under state statute, and he said it is limited to running meetings and signing off on expenses. He said he plans to return to the 2023 Montana Legislature with some changes in the law that would help.

For example, right now, companies that file applications with the PSC are supposed to pay a filing fee. If they don’t, the agency is in trouble for not collecting that revenue, but it can’t deny the application, and Brown said “there’s no hammer.”

“We send them past due notices, and they still don’t pay,” he said.

Brown said he would be asking for help from the Legislature to implement changes in the law that would shore up the commission’s management abilities.

Sen. Tom McGillvray, R-Billings, made the motion to ask the PSC to return for an update in October and for the committee to delay acceptance of the audit. McGillvray also said it was important to note at the meeting that Gov. Greg Gianforte was being asked to remove PSC commissioners who violate the law. The Billings Gazette reported former PSC Chair Greg Jergeson, a Democrat, asked the governor, a Republican, to use a law that has not been used before to remove a seated commissioner.

Biden’s State of the Union address by Joseph R. Biden March 1, 2022
Montana politics, politicians may have been able to save… by Marilyn W. Thompson September 7, 2022
Misogyny is fueling the country’s gun violence epidemic,… by Anna Gustafson September 22, 2022