‘This is quite concerning’

(Provided by Pixabay via Pexels.com)

Roughly 30 percent to 50 percent of high school students in most Montana counties felt so hopeless, they didn’t do normal activities for at least a couple of weeks in the 12 months prior to a spring survey, according to results of the questionnaire.

“We’ve not seen data this high before,” said Susan Court, with the Montana Office of Public Instruction. “And remember, this survey was done in the middle of a pandemic.”

Monday, Court presented county level high school results from the OPI Youth Risk Behavior Survey to the Education Interim Committee of the Montana Legislature. The survey was developed by the U.S. Centers for Disease Control and Prevention and has taken place since 1991.

“Back in 1991, a lot of behaviors that we have nowadays weren’t even present, such as vaping, texting and driving,” Court said. “So the survey has changed quite a bit in the last 10 years alone.”

It measures health risk behaviors that contribute to the leading causes of mortality and social problems among youth and adults in the United States. Court, the Youth Risk Behavior Survey program and state coordinator at OPI, said educators have been eager to participate in the survey, and she is awaiting state level results.

“We need to know where our kids are here now in a pandemic,” she said, sharing the sense among professionals in the industry.

Members of the legislative committee didn’t discuss the results in depth, but Rep. Linda Reksten, a Polson Republican and former superintendent, said she hoped schools were putting together programs to help address some of the outcomes: “This is quite concerning to me.”

“I fear what the state data is going to show us in a day or two,” she said. 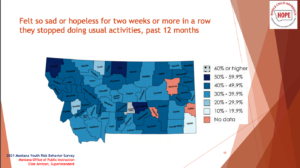 She said many counties saw 20 percent to 30 percent of their students who attempted suicide required medical treatment. She wondered about how suicide numbers might translate for a small town like Hinsdale, where she’s from: “Were they ready to go to three funerals that year?”

In another low mark for Montana, many high school drivers also reported texting and driving, with many counties showing at least 45 percent of students having texted while behind the wheel in the 30 days prior to the survey, according to the results. The survey data showed county level outcomes.

“Montana sadly ranks No. 1 in the nation in texting and driving amongst our young people,” Court said. “That was in 2019. I am eagerly awaiting the 2021 (statewide) data.”

The survey also showed that cigarette use by youth has followed a downward trend, but high schoolers are vaping and using marijuana, with many counties seeing 30 to 40 percent of students having used marijuana in their lifetime. As for tobacco, three or four decades ago, the entire state would have been dark blue, indicating high use of cigarettes, Court said.

Now, though, just 5 percent to 10 percent of the high school students reported having a cigarette in the 30 days before the survey, conducted in the spring. “This is a good slide,” Court said, noting the paler blue indicators.

But most of the counties had 20 percent to 30 percent of respondents reporting having vaped within 30 days, and in a handful of counties, use is high even on school property, according to the survey results. Court said even if teachers are trained to look for the devices, they’re hard to spot because they look like markers or USB drivers, and students can disguise them with their hoodies and even use them in class.

“They slide them up their sweatshirt sleeves and sit there and puff on them, and they’re covered by the hood,” Court said.

The number of students who reported having had an alcoholic drink in the 30 days prior to the survey also has dropped dramatically in the course of a decade, Court said. Most of the state showed 10 percent to 30 percent of students having had alcohol in the previous month, although more students in the northeast corner report having had a drink.

Generally, Court attributes the drop to prevention programs in schools. She also said there’s a lot more emphasis on the effects of alcohol impairment, such as on driving and in sexual behavior.

Fewer students also are reporting having had sexual intercourse in their lifetimes, a question Court said is meant to reduce unintended pregnancies and sexually transmitted diseases. Generally, 30 percent to 40 percent of students in schools have had sex, down from 48 percent in 1991.

Court also said many counties report high numbers, 60 percent to more than 70 percent, of students who spend three or more hours on screens on an average school day, not counting school work. And she said the link to another data point is important.

“What research is showing now is there is a great association between screen time and depression rates,” she said.