Montanans are already sparring over one map with new congressional districts, but there are 231 maps in all.

One map — public map 42 — discussed during the brief public comment period highlighted the debate surrounding the redistricting process about whether one of the two districts should be competitive in giving both Republicans and Democrats a fair shot at taking the seat.

According to the map designer, “[the map] creates equal-sized districts along broadly an east-west meridian with some deviations to preserve the integrity of the Blackfeet and CSKT reservations.”

“We have observed that Native Americans do not get the same type of political engagement as other communities in Montana; politicians rarely visit Native American reservations,” he said. “Native communities have been ignored for too long. Having a competitive congressional district will serve to make politicians more responsive and more responsible.”

Rep. Derek Skees, R-Kalispell, speaking on behalf of himself, said he was not opposed to the Blackfeet and CSKT reservations being grouped together, but spoke against PM42.

“I don’t think it’s ironic that this district is also drawn with the heaviest Democrat precincts north of [the Highway 2] line. So it’s a clear attempt in order to politicize the split,” he said. “Splitting Flathead County, the largest and strongest Republican county in the state directly in half, along mostly partisan lines by the way this map is drawn is a failure.” 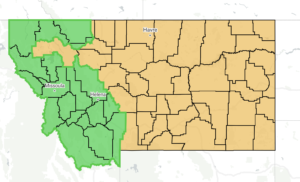 The public had until Wednesday to submit proposals on how Montana’s two congressional districts should be drawn.

Another popular design submission was dividing the state by population into “east” and “west” districts, but Democrat commissioner Kendra Miller said the idea was not realistic.

“There’s so much more population in western Montana that you can’t have an exclusively eastern Montana district,” she said.

Three variations of the “east” and “west” maps were submitted multiple times at the behest of the Montana GOP. On Sept. 9, Debbie Churchill, grassroots director for the Montana GOP, sent out an email urging people to submit maps and comments supporting the “traditional East-West maps.”

“The Democrats have submitted hundreds of maps showing a Southwest district to combine Bozeman and Missoula together. That is the only way they can gerrymander a district to have any chance of winning a congressional seat in Montana,” she said in the email.

Because the maps were just made available to the public on Thursday, discussion on them at Friday’s meeting was brief, but Miller said she is expecting a more robust debate on Oct. 19 — a dedicated public hearing on the maps.

Much of the debate surrounding how the congressional districts should be drawn has revolved around the idea of competitiveness — whether one of the districts should be drawn in a way that makes it winnable for both Democrats and Republicans. It’s an idea Democrats on the Montana Districting and Apportionment Commission have embraced over the general objections of the commission’s Republicans.

Democrats argue having a competitive district will make for a more balanced and represented delegation, while Republicans say it is a form of gerrymandering, and proportionately, most districts should be Republican.

“It’ sort of like the temperature outside in that you can pretend that there is no temperature, but that doesn’t mean it stopped existing,” said Allison Dale-Riddle during public comment Friday about using past voting data when drawing the districts. “The competitive criteria, I think, is really important for our democratic institutions, and with so few maps being produced by independent commissions, I think you all have a great opportunity to use that competitiveness criteria.”

The U.S. Supreme Court has said that states have to draw congressional districts with populations as close to perfect equality as possible, saying that legislative maps with a total average variance of less than 10 percent are presumptively constitutional. The commission ultimately agreed on a criterion that legislative districts shall remain within plus-or-minus 1 percent population deviation.

“We are trying to achieve one person, one vote,” said Joe Lamson, one of two Democratic members on the commission. “Our responsibility is to the person, not to the geography, or the cows, or the trees.”

The Montana Districting and Apportionment Commission — made up of two commissioners selected by legislative Democrats, two by legislative Republicans, and a chair by the Montana Supreme Court — will filter through those maps as well as public input and submit a finalist package of the maps to the public on October 5. The commission must submit a final plan to Montana’s Secretary of State by November 14.

The commission also finalized letters it is sending to Gov. Greg Gianforte and Montana’s congressional delegation urging them to endorse a new process for incarcerated individuals’ addresses before incarceration to be counted on Census Day — as it stands now, the U.S. Census Bureau counts incarcerated people as residents of the correctional facility they reside in on Census Day.

The commission believes using this process would create more “complete, useful redistricting data for policymakers and line drawers in the future.”