Demonstrators protest as they walk toward Main Hall during a walkout at the University of Montana Alexander Blewett III School of Law. (Keila Szpaller/The Daily Montanan)

Everett Johns stood on the steps of Main Hall on Tuesday at the University of Montana and called on President Seth Bodnar to ask for the resignations of Alexander Blewett III School of Law Dean Paul Kirgis and Associate Dean of Students Sally Weaver.

“At best, they are incompetent leaders, and at worst, they have created and perpetuated a toxic culture at the law school,” said Johns, a second year law student. “They have reinforced rape culture, and they have silenced and retaliated against victims.” 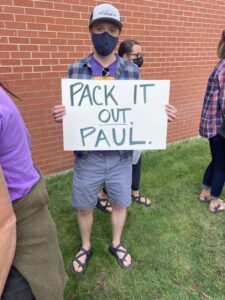 Johns made the demand in front of roughly 120 demonstrators who periodically cheered and held signs that read “Pack it out, Paul,” “Resign Now,” and “Sayanara, Sally!” He also requested the leaders “immediately” step down.

The students started planning the walkout roughly a month ago to show support for survivors of sexual assault and harassment after hearing reports Kirgis and Weaver ignored and mishandled complaints from students including rape reports.

In their speeches, the students talked about the impacts and prevalence of sexual violence and said law school administrators had tolerated sexual misconduct far too long.

In the law school north plaza, Kirgis stood just outside a door facing students as they spoke, but he did not offer any public remarks himself. Neither did Weaver. Both have denied they hindered students from filing sexual assault and harassment reports.

Last week, the Daily Montanan published a story citing women from the law school who said they had been discouraged from taking reports of sexual assault including rape to the Office of Equal Opportunity and Title IX, which handles sexual misconduct on campus.

In an email Thursday to the Blewett School of Law community, Kirgis issued a statement of apology that students did not feel supported and said media reports made him realize more needs to be done in addition to actions the law school already had taken.

Nonetheless, students called Tuesday for a change in leadership despite the dean’s message that described steps the school would take to move forward, including trainings.

Sammy Veneski, one of the first-year law students who spoke, said the class of 2024 had been in school just a couple of months, had already been through trainings, and showed no signs of not retaining information. Veneski said it’s the mandatory reporters who need training. 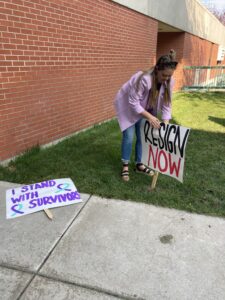 Annie Holland, a second-year law student, told the crowd she spoke as a domestic violence survivor and more importantly as an ally to sexual assault survivors. She said she was terrified to publicly admit she was a survivor because it might be the first time her parents learn of her abuse and her perpetrator might retaliate.

“But the thing that nags me the most is knowing that people will not believe me, that I will have to continue telling my story, time and time again, sharing the details of my abuse to justify how I feel,” Holland said. “When sexual assault takes place on campus, and the university does not strongly commit to address assault, victims are denied an equal education experience.”

Bodnar did not directly respond to the demand from students that he call for the resignations of Kirgis and Weaver. However, in a statement, UM spokesperson Dave Kuntz said the university takes reports of sexual assault and harassment seriously and works hard to ensure survivors can come forward without fear of retribution.

“UM has invested significant resources in response to allegations with regards to the law school,” Kuntz said. “Those investigations have found leaders at the law school did not violate university policy. But we acknowledge and take earnestly concerns expressed by some in the law school. Moving forward, UM is taking further action by launching an independent, outside review to assess the learning and working environment in the law school and the mechanisms in place to best support students.”

In his remarks at the plaza, Johns said he was raped at the age of 15 and his assailant told him to keep it a secret. Johns said he began to isolate from family and friends and finally decided to report as an adult, but the justice system failed him.

Had someone intervened, Johns said his rapist may have received treatment and still could, but he fears the man continues to victimize other children.

“I know that my story is not unique,” Johns said. “I am here today with you because I know firsthand how it feels to be shut down, gaslit and ignored by those in charge.” 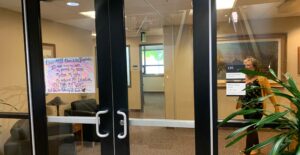 He pointed at Weaver specifically for doubting students’ abilities to recount their experiences accurately when bringing her reports of sexual assault.

Statements Weaver made earlier in response to questions about the way she handled assault complaints from students have been repeated on social media, and a demonstrator posted one of her quotes on a sign Tuesday: “I suspect it was because I went too fast, used terms and concepts that I erroneously assumed they would understand, and failed to test their understanding.”

Johns said the experience illustrates how much Montana needs trauma-informed legal professionals. To applause and cheering, he said trainings and meetings are not enough, and “apologies are too little, too late.”

Not all of the participants were driven by a desire to oust the law school leaders. Kalysta Fern, a graduate student in environmental studies, said she came to the event more out of curiosity.

“I don’t know if I see it being given to Dean Kirgis and Sally Weaver,” said Fern, who will head to the law school next year. “It seems to be trial by mob, and that bothers me.”

Athena Waschke, a third-year law student, said she attended the event because she is a survivor of domestic violence and sexual assault. She said it’s important to believe survivors, but the administration had not taken reports seriously.

“They’ve tried to silence people, and the way we deal with this in our society is by talking,” Waschke said.

After the demonstration, a sign posted at the entryway to the dean’s office addressed the administrators: “Dear ABIII admin & the repeat perpetrator, You took away my worth, my privacy, my energy, my time, my safety, my confidence, my education. YOU TOOK MY VOICE. But now I’m taking it back.” A heart was drawn at the end of the message. 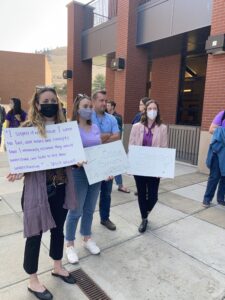 In separate statements, both faculty and staff of the law school signed letters of support for students. At least three faculty members, Andrew King-Ries, Monte Mills, and Hillary Wandler, stood in the demonstration wearing purple shirts that read “Solidarity.”

“We recognize the significant impacts of the recent distressing news coverage on our students, alumni, staff and entire community,” said the faculty statement. “Like many of you, we were saddened to read about the concerning allegations and pain expressed in those stories.

“We love our school and our students — past and present — and regret the damage done to the learning environment and institutional reputation that we deeply value and work so hard to create and maintain. We refuse to let our school be defined by these events or this moment.

“To every member of our Law School community, particularly those angered, hurt, dispirited,  confused, or otherwise distressed by these events: We hear you. You are not alone. We are firmly  committed to working together to heal and to build the transparent, safe, inclusive environment  we all value and deserve.”

Staff also issued a statement: “We, the staff at the Alexander Blewett III School of Law, acknowledge the turmoil our school community is experiencing. As staff, we are called to engage with students, faculty, administration, and the greater ABIII community. Our work is guided by a steadfast commitment to serve all students.

“This is a challenging time.  Each of us is here for each of you in support of and solidarity with the community we love.”