Provided by the Fergus County Sheriff’s Office with credit to Sgt. Jeremy Johnson.

Carl Seilstad was born and raised in Fergus County, and the fire that burned down Denton is the worst he’s seen.

“I cannot remember this type of devastation within a single community,” said Seilstad, a Fergus County commissioner, on Thursday afternoon.

In a phone call, Seilstad said two other commissioners were in Denton at a fire briefing, and he was at the office working on an emergency disaster declaration. He said all the commissioners planned to head to Denton on Friday to meet with Gov. Greg Gianforte.

According to a social media post Thursday from the Fergus County Sheriff’s Office, high winds Wednesday pushed a fire into the town of roughly 300 and burned 25 structures including grain elevators and bridges. A later post noted 13 residences were a complete loss. The Sheriff’s Office also said rural fire agencies were working to prevent the blaze from spreading and anticipated the work would continue for “several more days.”

Late on Thursday afternoon, InciWeb listed the cause of the burn as under investigation. Although the Sheriff’s Office said it planned to release residents from evacuation orders Thursday, it also warned people that high winds were still in the forecast, so they shouldn’t let down their guards.

“At this time Sheriff (Rick) Vaughn would like to stress the fact that there was no serious injuries or loss of life during this unprecedented event,” the post said. “We can replace property, but we cannot replace a life. Sheriff Vaughn would like to thank the community and emergency services from across Montana for doing what Montanans do when their neighbors are having a bad day.  Montanans step up and lend a hand and get the job done.”

Fire ecologist Philip Higuera said the fire is, on the one hand, surprising in that such blazes typically don’t take place in Montana in December. On the other hand, he said the stage is set for such an event, and the National Interagency Fire Center’s outlook points to just that geographic area.

“There’s one point in the West that has above normal potential for significant fire activity in December, and it is central and eastern Montana,” said Higuera, a professor of fire ecology at the University of Montana’s W.A. Franke College of Forestry and Conservation. 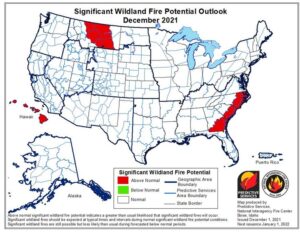 Exceptional drought means the vegetation is dry, and some areas in central Montana are seeing record low fuel moisture, Higuera said — or record high dryness: “The fuels out there right now are hanging out in conditions that are similar in mid July.”

In July and August, people think about being careful with sparks from fires, he said. Now, Higuera said people will need to start thinking about the same thing later in the year since fires this time of year are nearly always started by humans: “As climate changes, we will need to adapt.”

He also said the drought in the region is part of a broader pattern of a lengthening fire season, with the shoulders of the season starting earlier and extending later:  “That’s a clear pattern that we see across the West. As that pattern continues, these types of events will become more and more common.”

In Fergus County, Commissioner Seilstad said it’s the third big fire in just a matter of a few months, and he worries about the toll the blazes are taking on volunteer firefighters, who have responded to all of them. He said he has some concerns about the mounting pressures on people in general.

“With COVID and the drought that we’ve had in the agricultural community and now this fire, it’s going to be a tremendous amount of stress on individuals,” Seilstad said.

He said he hopes the people can get the help they need, but he said rebuilding the community will be a process and take time. People may be able to move in with friends or relatives temporarily.

“But the housing in Fergus County is nonexistent,” he said. “It’s not like you can run out and find a place to rent.”

At the same time, he said, residents of Jordan have been offering to help because they have experienced a similar situation, people have donated bread, sandwiches, bottled water, and clothing, and he described Ryan Peterson, the disaster and emergency services coordinator, as a “godsend” who has been “working his little hienie off at Denton.”

The fire had burned more than 10,000 acres since it started Tuesday, but Seilstad said people in Fergus County know how to get through tough times, and they’ll get through this disaster. He asked people to send their thoughts and prayers to community members.

If you need help

Commissioner Troy Downing:  Call 444-2040 if you need help with your insurance company or go to csimt.gov.