University of Montana poll: Quality of life down, growth too fast

How do decision-makers ‘keep Montana from being loved to death’?

Montanans value public lands and wildlife, but 57 percent consider the rate of growth in the state to be too fast, and 55 percent report their quality of life has gotten worse in the last five years.

That’s according to poll results of the Montana Statewide Survey 2022 released Tuesday by the University of Montana Crown of the Continent and Greater Yellowstone Initiative.

“If we really want to call ourselves the ‘Last Best Place,’ decision-makers on all levels of government need to figure out how we’re going to keep Montana from being loved to death,” said Rick Graetz, initiative director with UM, in a media call. 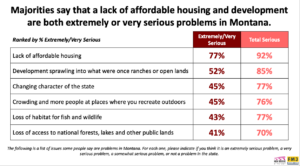 The survey was conducted by a bipartisan research team, New Bridge Strategy, which does Republican polling, and FM3 Research, which works on the Democrat side. The team surveyed 500 people via cell phones and landlines for a margin of error of plus or minus 4.38 percent.

In one highlighted outcome, total support is “the highest it has been” for the Blackfoot Clearwater Stewardship Act in western Montana, at 83 percent this year compared to 75 percent in 2020, 73 percent in 2018 and 74 percent in 2016. Results said support cuts across party lines.

The survey also said that 79 percent of voters said it’s important for Native American tribes to have a stronger role in public land decisions when they affect sites that are sacred or historically important to tribes.

For the first time, the survey included questions about growth in Montana, and results include the following:

“There’s a lot of concern here about the direction that the state’s quality of life is headed,” said Dave Metz, partner and president of FM3 Research.

The presentation noted that Montanans in every type of community, cities, small towns and rural areas, count affordable housing as a serious problem, 80 percent, 77 percent and 74 percent, respectively.

The engagement with public lands is high, said Metz: “This is about the highest number that we see in doing surveys like this across the country.”

Lori Weigel, principal with New Bridges Strategy, said people are concerned about the effects of growth on wildlife, and the survey showed strong support for helping animals:

As for politics, the result noted that 80 percent of Republicans and Independents and 90 percent of Democrats agree with putting pot taxes to conservation. It said people from cities, towns and rural areas agree as well, as do men and women of different age groups.

In an outcome the pollsters said “is one of the most bipartisan responses to any policy we tested,” 81 percent of Republicans, 86 percent of Democrats and 71 percent of Independents support presidents continuing to use their ability to protect existing public lands as national monuments. 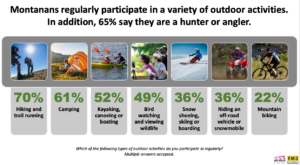 The survey noted most voters want Wilderness Study Areas to continue to be used for recreation and wildlife habitats, but with a “modest change,” a drop from 81 percent in 2020 to 72 percent in 2022. It said in 2020, 15 percent of respondents would allow changes in uses such as oil and gas exploration and establishment of new or expanded motorized recreation, and 23 percent would do so in 2022.

As for a couple of specific plans, 77 percent of polled voters support the proposal to protect a Wilderness Study Area in the Gallatin Range near Yellowstone National Park, and 71 percent support the Lincoln Prosperity Proposal to increase protections on national forest lands and boost recreation near the town of Lincoln.

Generally, Weigel said the survey was an opportunity to look at some of the changes in Montana. She said results show Montanans are consistent in their support for conservation, and they see growth and development as areas where policymakers need to take action.

The survey has been conducted every other year since 2014 and was completed this year from April 4-10. It counts a 95 percent confidence interval.

University of Montana poll: Quality of life down, growth too fast