Montana is on track to have one of the hottest Augusts on record as this year’s fire season kicks into gear.

For many parts of the state, temperatures have been above average through the first half of the month, and with no signs of slowing down in the coming weeks, the state is likely to record one of the top-ten warmest Augusts, according to the National Weather Service. Things have been particularly hot in Helena, with the state’s capital on track to record its hottest August ever. Average temperatures are calculated by taking the averages of the daily high and low temperatures.

With the hotter temperatures and increased drying across the state, there has been an uptick in fire activity as well with 25 starting in the last week and seven in the last 24 hours.

Over the next couple of weeks, Montanans can expect continued hot temperatures. Both short- and long-term lookouts out from the Climate Prediction Center forecast above-average temperatures and below-average precipitation for much of the state.

“We’re basically in this pattern where everything’s fairly locked into place; we’ve got … this weather pattern that’s really not going to change very much over the next couple of weeks here. So we’re looking at continuing overall warm and dry above average temperatures and below average precipitation as we close out the rest of August,” Nutter said.

And with hotter temperatures comes an increased chance for fires.

“We’re certainly drying, and the forests are dry and receptive to fire, which means any lightning activity has the potential to create new fire starts,” Nutter said. “So with the forests critically dry as they are, you know, we need to be very careful about creating, putting out any campfires, or just avoiding campfires is a better choice at this stage.”

Since July, nearly 10 “notable” fires have started in the state, burning more than 100,000 acres, according to the Friday smoke forecast from the Montana Department of Environmental Quality. And drought conditions have worsened as well. According to the National Oceanic and Atmospheric Administration’s drought monitor, 50.6 percent of the state is experiencing abnormally dry conditions, compared to 39.8% last month. 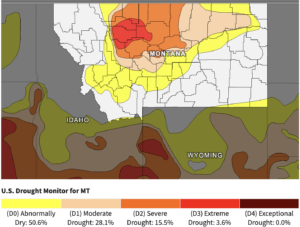 “Things are changing really quick, and that is the key message: our weather and our climate is really fickle, and this is something that we anticipated,” said State Climatologist Kelsey Jensco in a phone call Friday. “As a whole, much of the state was in a really large deficit from previous years’ conditions … the last 30 days have been pretty dry, and it has set the stage for fire conditions.”

The state’s fire dashboard shows 58 fires burning in the state, 12 of which are considered large. So far this year, the state has seen 1,211 fires, with 24 igniting in the last week. Expectedly, most of the fires — 585 or 58 percent — were human-caused, while 234 were natural, and 201 have no designated cause.

But due to heavy spring precipitation, the state’s fire season got off to a later start than last year. This year only, 55,616 acres burned as of August 9 — compared to 940,000 last year, according to reporting from the Montana Free Press.

The largest active fire is the Elmo fire, which has burned 21,349 acres and is 76% contained. The fire was first detected on July 29 and has since burned down a total of eight structures, and there are currently 409 personnel assigned to fighting it.

The Busman Road fire is the only other active fire in the state that has burned more than 10,000 acres. The fire, which is 100 percent contained, was first detected on August 4 and has burned 12,886 acres.

And things are going to get worse before they get better, Jensco said.

“Given the direction we are headed … I see drought expanding within the next couple of weeks,” he warned. “I see continued dryness and increasing dryness based upon the seasonal outlook — and because summer is the hottest and driest season.”

Drought conditions in Montana as of last Thursday are as follows.

Keith Schubert was born and raised in Wisconsin and graduated from the University of Minnesota in 2019. He has worked at the St.Paul Pioneer Press, Milwaukee Journal Sentinel and most recently, the Asbury Park Press, covering everything from local craft fairs to crime and courts to municipal government to the Minnesota state legislature. In his free time, he enjoys cheering on Wisconsin sports teams and exploring small businesses. Keith is no longer a reporter with the Daily Montanan.

Biden’s State of the Union address by Joseph R. Biden March 1, 2022
Montana politics, politicians may have been able to save… by Marilyn W. Thompson September 7, 2022
Misogyny is fueling the country’s gun violence epidemic,… by Anna Gustafson September 22, 2022