Zinke campaign describes Lamb repost as ‘vile’ after request for Lamb to step down, endorse GOP

The three candidates for the U.S. House in Montana's new western district attended a forum in Missoula in August 2022. (Keila Szpaller/The Daily Montanan)

Libertarian John Lamb published a screenshot from a ZinkeforMontana post this week that attributes a quote insulting veterans to Lamb — a quote Lamb said he never uttered.

However, Lamb, a Norris farmer, took pride of sorts in the attack, which he said followed a request last month by Republican Ryan Zinke that Lamb bow out of the U.S. House of Representatives race and endorse the GOP candidate. 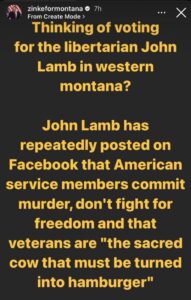 The screenshot of ZinkeforMontana’s Instagram said this, in part: “John Lamb has repeatedly posted on Facebook that American service members commit murder, don’t fight for freedom and that veterans are ‘the sacred cow that must be turned into hamburger.’”

The Zinke campaign pointed to a Facebook repost from John Lamb Last Free Man. The picture shows a soldier holding an American flag and the following script: “Before you make fun of children for believing in Santa Claus, remember, there are still people who believe the U.S. Troops fight for freedom.”

The original poster wrote that people don’t trust the media and politicians, but the U.S. military remains a “sacred cow.” In a phone call, Lamb said he has a couple of administrators for his social media pages, and he supports veterans who serve honorably but generally distrusts the military industrial complex.

Lamb is the third party candidate in the U.S. House of Representatives for Montana’s new western district. Zinke, former U.S. Secretary of the Interior, is the favorite to win against Lamb and underdog Democrat Monica Tranel in a race that again has candidates vying for the veteran vote.

Montana has a high population of veterans, and political scientist Jeremy Johnson said the GOP typically wants to consolidate the veteran vote. But Libertarian candidates can peel votes away from Republicans.

“While we often think of veterans as, generally speaking, supporting Republicans, it’s not always the case,” said Johnson, with Carroll College in Helena. “Some are swing voters.”

He also said Democrats generally have to do better with veterans in order to win in Montana. Last month, Tranel launched Veterans on the Trail for Tranel to highlight her platform for veterans.

In a phone interview, Lamb said he has been critical of veterans who have killed illegally while on duty. He said he opposed former President Donald Trump’s pardon of Eddie Gallagher, a U.S. Navy SEAL who had been charged with murder and found not guilty of serious crimes, a controversial decision that angered military chiefs.

Tuesday, Lamb said he didn’t know the source of the “sacred cow” quote. After the Zinke campaign provided the source, Lamb reiterated his support for veterans; he agreed he has been critical of times the military has been deployed over, say, oil, but not to defend freedoms.

“The military has been sent into places where I felt it was unneeded,” Lamb said.

The Zinke campaign did not respond to a question about why Zinke, a proud Navy SEAL, would seek the endorsement of a candidate he alleged had repeatedly insulted veterans. In an email, spokesperson Heather Swift described the comments Lamb shared online as “vile.”

Last month, all three candidates appeared at a forum in Missoula, and Lamb said Zinke personally asked him at the event — twice — to step down from the race. Lamb also said Zinke, who previously served in the U.S. House, wanted Lamb’s endorsement, which Lamb said he found “comical.”

Johnson said a request that a candidate step down can be seen as a bullying attempt. 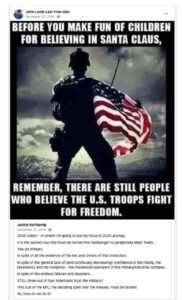 At the Missoula event, Lamb said Zinke told him the Libertarian could give the race to Tranel, but over the phone, Lamb said he isn’t worried that a Democrat will win.

He said he would love to win and represent Montana as a congressman, but he has an uphill battle as a Libertarian without the big money his opponents have. And he said the decision is up to voters.

“I think she would do a great job if she was elected,” Lamb said of Tranel. “So I’m not worried if she wins.”

However, Lamb admitted he didn’t have the same peace of mind about a possible — analysts say very probable — win by Zinke.

“I believe that he has a record of some things that he needs to address before he goes back into public office,” Lamb said.

In recent years, the Inspector General’s Office of the U.S. Department of the Interior has investigated Zinke for numerous allegations of unethical dealings. Most recently, the IG’s Office found last month that Zinke didn’t tell the truth about his interactions with corporate casino representatives regarding his decision as Secretary in a tribal casino deal.

Zinke, who served as U.S. Secretary of the Interior from March 2017 to January 2019, has maintained the investigations were politically motivated.

The most recent investigation report was released under DOI Inspector General Mark Greenblatt, appointed by Republican Trump in January 2019 and confirmed the following August. A February 2022 report that found Zinke was not honest about a Whitefish development also was released under Greenblatt.

Three earlier reports from 2018 and 2019 were published under leadership that was led by a senior member of the civil service, but not appointed by Trump.

Editor’s note: This story has been updated with comments from the Zinke campaign and additional response from Lamb.

Zinke attacks Libertarian Lamb, Tranel points to GOP… by Keila Szpaller September 30, 2022
Misogyny is fueling the country’s gun violence epidemic,… by Anna Gustafson September 22, 2022
'If I die and there is a hell': Montana State Hospital… by Keith Schubert April 10, 2022