Attorney James Brown conceded the race for the second seat on the Montana Supreme Court to Incumbent Justice Ingrid Gustafson in a press release Wednesday morning.

Gustafson, who first took the seat in 2017, raked in 54 percent of the vote with nearly 70 percent of precincts reporting. Public Service Commission President Brown brought in 46 percent.

In the release, Brown said campaigning for the seat was one of the most rewarding professional experiences of his career and congratulated Gustafson.

“I am humbled by the high level of support our campaign received from Montanans all across the Treasure State and from all walks of life,” Brown said.

In a statement, Gustafson said she was honored to have earned the trust of the voters. Gustafson’s campaign said it was issuing the statement before the Associated Press call of the race “with an eye on the ongoing count of ballots in three major counties that have yet to fully report.”

“I am heartened to know that Montana voters are courageous and bold enough to stand up for our democracy and reject my opponent and his supporters’ inappropriate attempt to politicize our judiciary,” she said in the statement. “Montana voters refused to be divided and manipulated, instead taking a stand for the rule of law and the independence of our judiciary.”

The less competitive race between incumbent and longest serving member of the court Jim Rice and lawyer Bill D’Alton had Rice ahead with 78 percent.

Supreme Court races in Montana are nonpartisan, but the race between Gustafson and Brown had been colored by partisan influence, with high-profile sitting Republicans endorsing Brown and Brown telling a crowd earlier this year that Republican Gov. Greg Gianforte encouraged him to run.

The race also saw an unprecedented amount of outside spending, with over $2 million reported to the Commissioner of Political Practices in October alone, according to reporting by Lee Enterprises.

Brown was elected to the PSC in 2020 and has run James Brown Law Office for a decade. Brown previously represented the dark money group American Tradition Partnership, then known as Western Traditions Partnership. He serves as executive director for the Montana Independent Bankers Association as well as the Montana Funeral Directors Association.

During Gustafson’s time on the bench in Yellowstone County, she started the Felony Drug Court aimed at giving offenders tools and treatment for substance abuse, as well as a child welfare project. 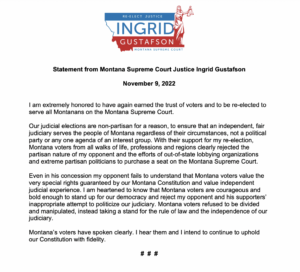