Tuesday, the special select committee on redistricting held a public hearing on the proposed House and Senate legislative maps submitted by the Montana Districting and Apportionment Commission in early January.

At the meeting, Ellsworth proposed Senate Joint Resolution 8, which outlined objections to the work done by the commission, and Republican legislators lined up to support it.

Nearly 30 proponents spoke in favor of Ellsworth’s resolution, the majority of whom were Republican legislators. The resolution said the redistricting commission did not meet certain criteria it established, or that it didn’t apply them consistently, or follow constitutional requirements, like compactness, or keeping tightly drawn districts.

Some legislators were upset they were drawn out of their current districts, like Rep. Joe Read, R-Ronan, who testified, as he had before the commission multiple times, that he was drawn out of House District 93 “by about 45 feet.”

However, Democrat on the redistricting commission Kendra Miller said in a text she would have “no problem” considering requests from lawmakers about their own districts, “if they’ll be specific about how the districts would need to change so we can see if it’s even possible.,”

Patrick Yawakie, who represented the Blackfeet Tribe, said that there continues to be discrimination against the right to vote despite the Voting Rights Act, and he said a poster about the map that pictured a rat was offensive.

“I saw an organized group holding up a banner and attacking the proposed redistricting maps and comparing Senate District 16 – one of the three Indian majority districts, Senate seats, that unites Rocky Boy, Fort Belknap, and Fort Peck – to a rat,” he said. 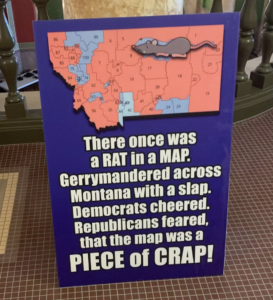 The sign showed a picture of the proposed map with a rat superimposed on top of the majority minority districts in eastern Montana.

Miller also commented on the poster.

“Far too many Republicans think that compliance with the Voting Rights Act is up for debate,” Miller said, referring to the sign. “This is disgusting.”

Also in opposition to the resolution, Rep. Jonathan Windy Boy, D-Box Elder, said that proponents made a “perfect argument” for why the new map needs to be adopted as they talk about “winners and losers.”

He mentioned the history of the Native American vote in the U.S. and how it took the 1964 Voting Rights Act for Natives to be able to vote in elections.

The resolution lists urban areas in Missoula County, Lewis and Clark County, and Gallatin County as areas of concern for compactness, and it listed Whitefish as a place of concern for municipality splitting, all concerns that were brought up during public hearings held by the commission in December.

The committee has 30 days, until Feb 5, to give recommendations from the legislature to the commission to consider at its February meeting.

Although public comment consisted mostly of Republican legislators expressing concerns around how districts were drawn where they serve, a few supporters of proposed maps said the design is likely as good as it’s going to get, especially around the Voting Rights Act, considering the amount of work that the commission has put in already.

In their testimony, Great Falls Representatives Steve Galloway and Lola Sheldon-Galloway were upset about a “donut hole” senate district including the downtown. Republican lawmakers from the area were involved in advocating for the district lines earlier in the process, with the commission voting to incorporate their feedback.

Other concerns raised were that the commission favored competitiveness, a discretionary goal, over compactness, which is constitutionally required, as discussed by House Majority Leader Sue Vinton, R-Billings.

Rep. Linda Reksten, R-Polson, had several complaints about how the Polson area was divided, east and west, “by the bridge,” a change proposed by Republicans on the commission.

She said it was not compact and placed an “undue burden” on voters in smaller towns like Lakeside and Ferndale, who would have to travel far to vote.

“My concern is that Montana law be followed and not manufactured to suit one political party over another party,” Reksten said. “The party with sound policy for the citizens of Montana should win in the districts rather than orchestrating district changes to favor any one party.”

Miller too said the Republicans on the commission drew the area based on feedback from Republican legislators in the area. However, she said Reksten could propose a fix or work with the Republican commissioners who drew the lines.

In his testimony, Yawakie focused on the history of the Native vote and compliance with the Voting Rights Act. He said it is not only the right thing to do, but the law of the land.

However, when fielding a question on the possibility of the legislature producing a map compliant with the Voting Rights Act, Yawakie said he doubted a better map could be drawn given the time and input the commission had put into the proposed maps already.

Ellsworth said following the meeting Yawakie’s argument made no sense to him.

“What you’re saying is, this is the only product they could have ended up with, period. And that’s just a really terrible argument,” he said. “You follow the Voting Rights Act, and you do that. And I would say, you follow the Constitution, and that’s what wasn’t done.”

Chairman Mike Cuffe, R-Eureka, encouraged the public to submit comments via the legislative website until Thursday at midnight. The committee will meet again on Friday at 8 a.m. to conduct a work session on their recommendations.